Ms. Yuko Haraguchi a writer, stayed in ‘FLAT Kiso’ for one month and wrote about her experience in Kiso town, Nagano. 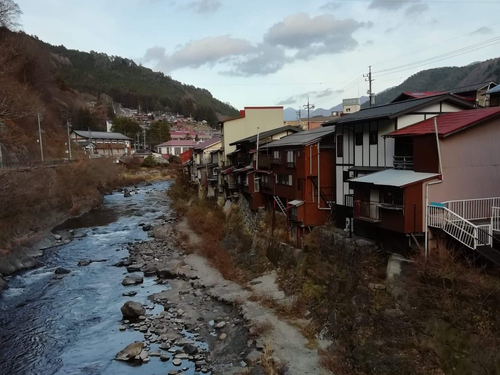 At the back of the office, there was a balcony, where I used to look out at the icy edge of the river banks. There flows the river called Kiso-River, running from north to south, with its crystal-clear surface. It’s not a big river – you can say it’s a stream running from the mountains.
Mountains are all around the town. Immediately after I had arrived, I felt that the mountains on either side of the road were coming closer and closer, as if they would shut up and stick together in the end. In fact, this area is a deep ravine with some towns in the bottom – Kiso-Fukushima is one of them.

I was one of those who travelled to the town of Kiso-Fukishima for a month and installed myself in the coworking space, to work remote.
Kiso-Fukushima is an old historical post town, which was prosperous the most in Samurai era (‘Edo Period’). Just like those old historical towns I have visited, I was fascinated by the old culture, and here, I was fascinated more than usual. The smell of the past was wafting over every corner of the town I walked. And the town is small, sandwiched in between the mountains – meaning that everything is in the walking distance.
The office was located right in the middle of the historical sites, and next to a series of ‘riverbank houses’, the old, half-torn houses overhanging above the surface of river, which have been so independent to each other for hundreds of years that they could never been apart.
Many things are old and traditional here. The house I stayed was a 100-year old traditional house. On the other side of the river, there was a mansion of an old city governor of samurai during the Edo Period. Closeby, there was the ruins of old barrier called ‘Sekisho’, which served as immigration at the time of Samurai. 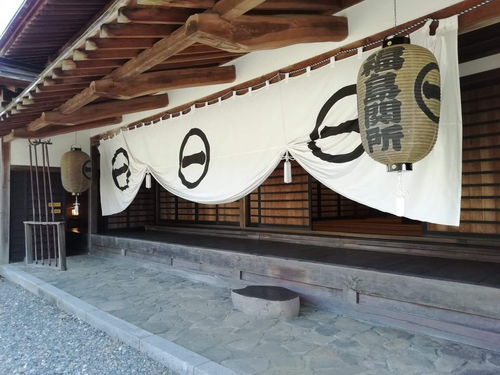 Immigration in the past

The ruins of ‘Sekisho’ was just 5 minutes away from the office - the building of barrier Samurai government (Shogunate) established. Back then, since it was right after the destructive 100-year federal war in Japan had ended, the Shogunate strictly restricted people from moving around the country. The Sekisho had a role of monitoring people passing, the high clan samurais and the normal travelers.
There were 2 routes connecting Edo (current Tokyo, where Shogunate was located) and Kyoto (where emperor lived). For each route, Shogunate focused 2 area for controlling and established 2 important Sekishos (thus, 4 in total). This Kiso-Fukushima Sekisho was one of these four strictest Sekishos.
This Sekisho especially had geographic advantage on enforcing strict control, because the town was deep inside the steep mountains to make it hard for the ordinary people to pass (stay away from Ninjas though ?).
And that means this town flourished by letting the travelers pass and stay for a night or two, waiting for the approvals to travel. This was also the route passed by the very high clan of Samurai (daimyo’s retinue) and even the royal family, so every time when the high class travelers passed, town was busy in a bustle. 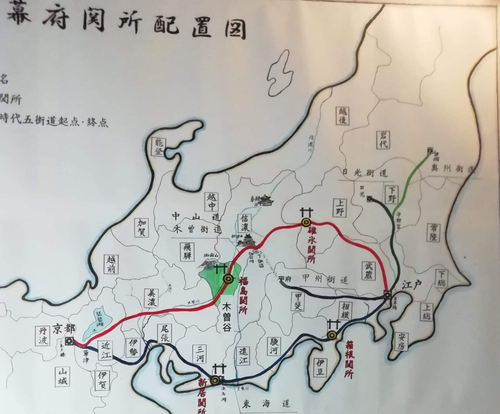 Connecting the past and now

Now it’s 2019. On the way back from Sekisho ruins, while I was walking a quiet downward slope, I thought I was sneaking in to a deeper history. The road was so quiet that I needed to try really hard to imagine how it was like 400 years ago here.
The idea of Sekisho in 17th century reminded me of my African journey where I needed to pass very strict immigration with visa. At the point when the history connected me to my reality in 2010s. I felt a bit weird.

Then the evening chime at 17:00 rang - I woke up at my reality. The chime is to let the kids know that ‘it’s time to go home’, and yes, kids go home with bear bells ringing on their sacks – bears are said to stay away from the sound of bells. As this town is surrounded totally by the mountains, wearing the bear bells is a security issue for human to live this area. It’s so understandable. The culture here is truly defined by the nature.
Plus, this chime was also the sound for starting the night life.

Uncovering some parts of the town

In the evenings, ‘another layer’ was waiting for me. Tradition and history were told everywhere.
At the bars, I enjoyed local sake called Nakanori-san. This sake was named after the titles of watermen sluicing the lumbers. This town has been a lumber town for ages. The river was so small that it was not even possible to make rafts for sluicing, so these watermen used to row down the river on the bare logs.
The other thing I enjoyed at the bars was the traditional tapas. It has history as well. In winter people ferment the pickles using the bacteria which had survived each year – it lasted for a few centuries.
Not just the pickles. I was offered wild boar meat soup. Here, outer skirt of the mountains the registered hunters set traplines intended to hunt some wild boars, deer, bears. They are bigger and fattier in the winter but less hunted, so in the winter time, some hunters become craftsmen.
And that some of these bars are inside old stockhouses of pawnbrokers from Samurai era. Dark and old, pulling me back to 400 years ago. Bars were the hubs for the time travelers here. I encountered another layer of the town. 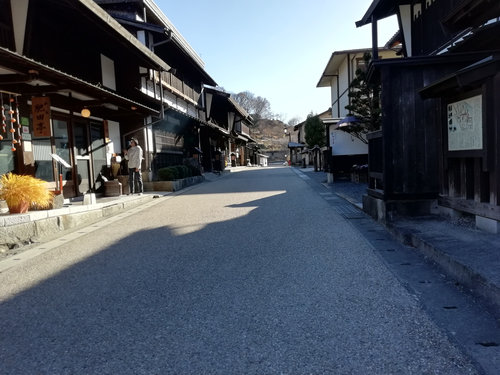 Feeling a pleasant buzz, I came out from a bar at one night. Getting back and forth the history, I walked along the river, flowing with a slush of the white waves. Starry night sky was covered by the lofty mountains.
On the way back there was an atelier. ‘In ateliers, people make things from mountains, while mountains make people’, I thought.
Throughout the history, mountains have defined the character of this town. And it still does, this moment I live. I could sense how slowly the time pass in the mountains – it seemed like the mountains slowed down the time of humans. 3 weeks has passed so quickly.
(Yuko Haraguchi)